Who To Blame For Donald Trump

We've been too kind, we...of sound minds and bodies. The water of degradation made to roll off our backs, while brainless, mouth breathing fools spout bullshit about "freedom", "immigration", "gun rights" and "big government" while using phrases pumped into and preached to them by money grubbing tubs of shit and witless women.

We figure, it's best to not bolster the situation. Let it settle down by letting her/him mouth off , despite it not making sense or inaccurate and change the subject. Let it go. 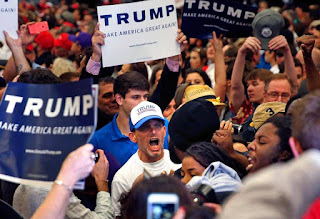 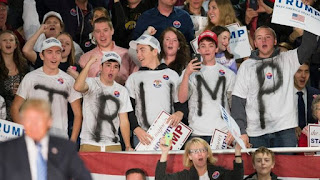 They're fucking idiots and I'm tired and angry. Extremely angry. Wretched, self-under informed, uneducated dip shits have thrown the United States under the bus. A bus headed for oligarch plutocracy because they're too lazy to read. Too stupid to educate themselves.

"We should talk, so as to understand our differences.", I've been hearing. "It's because they weren't listened to, We need to hear them out." No. Fuck them.

Idiots who take any misguided, pseudo information thrown at them by anyone claiming authority and brainlessly spout and act on it without actually fact checking it don't deserve "listening" when they, themselves don't listen.

These pricks have failed the United States and themselves. Why you ask? How? Ask them. Chances are...they don't know either. They'll get all charged up, and talk about things relevant to themselves and some imagined fear. However,...they should know a few things about their decision regarding their poor reasoning and to them, I say, "You've been duped by more than your self imposed illiteracy and dulled critical thinking, morons. Your own candidate has sold you out and will keep doing it. Here's how, stupid asses..."


There Won't Be A Wall 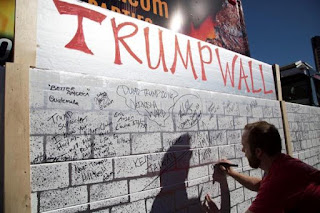 (pictured: The closest thing  you'll get to an actual Trump Wall)

He was stupid to say it and Trump supporters were completely stupid to believe it. However, there won't be a wall, dolts. Donald "Dumb Shit" Trump's newly minted mouth piece Newt "I Go Where The Money Is" Gingrich said...no wall. It was just to get votes. Trump supporters votes...and they bought in.  Why? Because they're suckers.

There Won't Be A
Hillary Clinton Prison Sentence 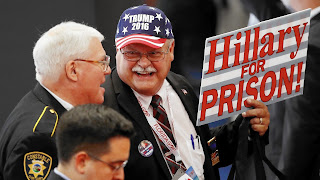 "Hillary in prison.
Is your dick as hard as mine, fella?"

Good god. Nothing screams, "Just stop it. Sit down, you're an idiot." than the "Hillary should be in jail!" argument. Anyone who has read actual facts regarding any of it, realizes that several government committees (headed by Republicans) and the F.B.I after months upon months of investigating have cleared her of everything. Anyone with even a passing chance at brain activitiy knows that there isn't a prison sentence in her future.

Still, Trump's "Dropped Repeatedly On Their Heads As Infants" supporters don't seem to take actual reality into consideration when thinking about...well, any fucking thing (that as history tells us is up to and including voting for a president).

Well, dip shits, your boy, Heir Trump has backed out of that too. Why? Because his very being screams lying douche and has...for some time. However, it should be noted that whomever voted for him is an idiot; a total grade-A fucking idiot...so, of course they'd miss the cues. 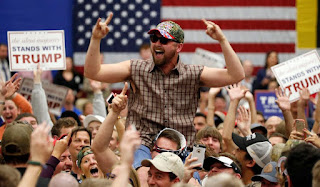 This is what fetal alcohol syndrome turns into.

It's hard to think about these...fucking people without momentarily pausing and injecting "stupid mother fuckers" at odd intervals while deliberating. It happens more often when thinking about "Obamacare" and these...stupid mother fuckers as it has been the single continuous thorn that Trump's ilk bitch about.

How many times must it be said that its the same fucking healthcare policy that Republican, conservative Mitt Romney came up with for Massachusetts? Ah, the number is incalculable because...holy shit. Telling that bunch an actual fact is like fist fucking a bowling ball.

Why is it like that? Oh, right...they don't read about the policies they complain about. Forgot.

By the way, Trump backed out of that too. You stupid, stupid pricks. 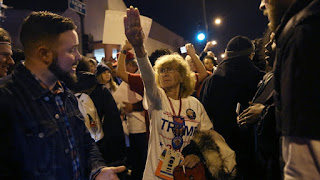 You voted in a fraud, fuckers. A misogynist, brain dead reality show star with rice paper skin that is going to sell you to the highest bidder and tell you to love it. *ding, ding ding!* You will too, because ...you've been doing it this long...why not? You're too afraid of shadows and too lazy to learn. Now, we will all suffer. The popular majority that didn't vote for that incredibly nauseating ass hat, suffers.

I'm fiery about it. Clinton wasn't a great choice either, but by millions and millions of miles a better choice than...whatever in the fuck we're going to get now.

Will I "unite"? No. Trump's band of smart-less wonders never did (remember the birther tripe?, the horrendous disrespect? the blatant racism?). Will I give him a chance? Oh, no, no, no...neither he, nor whomever voted him in deserves one. No.

Instead, I'll stand and loudly proclaim every wrong he commits and ask...why? Every idiot phrase that chirps from his weak mind, I will demand and answer for it. I will shout it at every simple minded half wit that voted for him. Why? When met with idiotic, directionless emotion, I will throw the facts at them, repeatedly over and over again...and demand a reason.

His mistakes are both his...and theirs. They will own that fucking asshole every step of the way.

He's not my president. He should never have been one. I have more respect for the office than that. Unfortunately, a quarter of America didn't feel the same...and now, their inability to apply critical thinking to relevant information and applying that important decisions has fucking failed them and affected us all.  Well...fuck them. Solidly. Fuck them.